Women On A Roll to mark 22nd anniversary

Women On A Roll to mark 22nd anniversary

If you’re looking for a way to make your summer memorable, why not check out Women On A Roll’s 22nd Anniversary Summer Soirée which has food, drinks, and dancing with beautiful women?

As a way to mark its 22nd year this August, the lesbian social organization Women On A Roll will party on Saturday, August 26 from 7:30 pm – 11:30 pm at the private home of Paula Teske and Peg Brewer in Venice.

As the event page on their website noted, “Address will be emailed to all paid guests one week prior to the event.”

Women On A Roll: What can you expect?

The party is set to start at 7:30 pm, with cocktails and live music by Corday, and then DJ Corday will provide the music for dancing around 8:30 pm.

Dress in your summer best– but given that the party will be both indoors and outdoors, watch out for cooler beach evenings.

The entrance price for the party ranges from the Early Girl Special of $35 if purchased on or before July 31, to the regular price of $40 if purchased after August 1.

The price will cover the appetizers, dessert bar, hosted beer and wine bar, and dancing with DJ Corday. As space is limited, early bookings are highly recommended.

Women On A Roll: Whose party is it?

Founded in 1995, Women On A Roll (or WOAR) is a social organization that has the simple goal of helping lesbians– both couples and singles– get to meet and know each other.

The organization came about when a small group of women that met for weekly bike rides started to gain more members.

With the group becoming larger and more diverse, its founder, Andrea Meyerson, saw an opportunity to create a group that would give lesbians an alternative to searching for like-minded women in bars.

Meyerson soon began organizing dinners at popular restaurants and group outings to concerts, movies, and the theater in and around Los Angeles.

Within five months from its founding, more than 200 lesbians had attended at least one event offered by Women On A Roll.

Women On A Roll: Getting organized

The group soon came up with a monthly newsletter to keep everyone up-to-date not only their activities but also other happenings in the gay and lesbian community.

From Southern California, the group’s reach extended beyond as they offered trips to out-of-state: from the cities of California to exotic places like Fiji and Peru.

The group has also traveled together in support of gay and lesbian causes around the country, like the National Center for Lesbian Rights’ Women’s Weekend in San Francisco and the Millennium March in Washington, DC.

They have also committed to supporting worthy causes and charities.

Since its creation, Women On A Roll has reached more than 13,000 women and has also helped them during all stages of their lives.

These include coming out, relocating to a new city, making new friends, finding romance and “starting over.” Even therapists have referred clients in need of support to the group.

As the group sets to celebrate its 22nd year, Women On A Roll remains committed to offering world-wide travel and other unique opportunities and events for lesbian members.

Share With:
Tags
anniversarypartyWomen on a Roll
Previous Article

Felice Schragenheim: A love during... 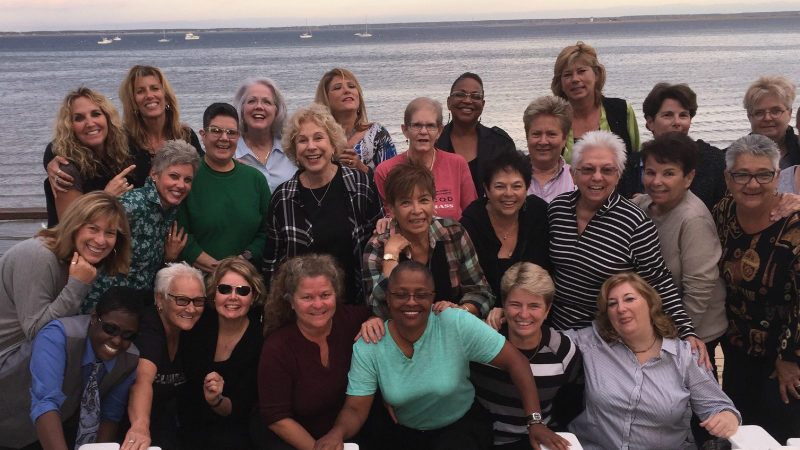 Women on a Roll takes Province...