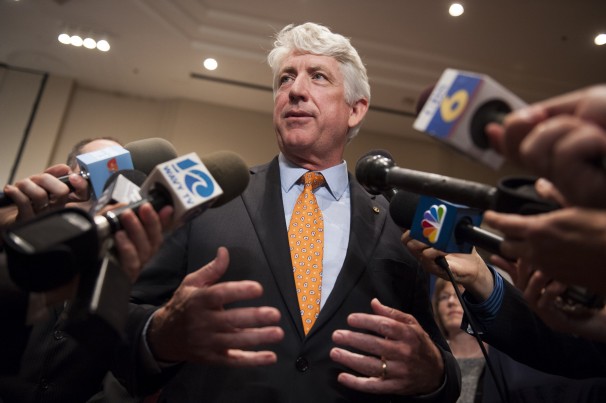 RICHMOND, Va. (AP) – Virginia Attorney General Mark Herring said he will ask the Supreme Court to review a decision that struck down the state’s ban on same-sex marriage, although he supports the lower court’s decision.

The Democrat has chosen not to defend the state’s law, but has also asked for 4th U.S. Circuit Court of Appeals to stay its decision because he believes there could be unintended consequences. Herring’s office said it planned to make its filing seeking a Supreme Court review on Friday.

“I believe the district and appeals courts ruled correctly in striking down Virginia’s discriminatory marriage ban, but it has long been clear that the Supreme Court will likely have the final word. I want that decision to come as soon as possible and I want the voices of Virginians to be heard,” Herring said in a statement.

On Monday, the plaintiffs in the case challenging Virginia’s same-sex marriage ban said they wanted a federal appeals court to allow gay marriages to occur before the U.S. Supreme Court can rule on the issue.

“The right to marry is fundamental, and thus Virginia’s marriage prohibition irreparably harms plaintiffs-appellees – and all gay men and lesbians in the commonwealth – each day that it remains in force,” attorneys for two gay couples challenging the law wrote in a Monday court filing.

Last week, a county court clerk in northern Virginia sought to delay the 4th U.S. Circuit Court of Appeals’ ruling striking down Virginia’s law while it is appealed. That 2-1 ruling upheld the decision made by a lower district court in Norfolk.

Attorneys for Michelle B. McQuigg, clerk of Prince William County’s Circuit Court, had argued in their filing that the delay would “ensure the orderly resolution of the important constitutional question presented in this case while avoiding uncertainty for the public and irreparable injury to the commonwealth.”

Without a stay, marriage licenses for Virginia same-sex couples could be issued 21 days after the ruling.

In the Monday filing, attorneys wrote that allowing the immediate enforcement of the district court’s injunction would not result in any irreparable injury to the Prince William County clerk, the state of Virginia or the public interest.

“In the unlikely event of reversal by the Supreme Court, any purported uncertainty about the validity of same-sex marriages performed before that decision could be addressed on remand. In any event, that risk of uncertainty falls on those same-sex couples who choose to marry before the Supreme Court has ruled, rather than on Clerk McQuigg or the Commonwealth,” the filing says.

The appeals court typically grants stays while cases are appealed to the Supreme Court. The American Civil Liberties Union of Virginia and Lambda Legal have also opposed the stay.