HomeNewsVernita Gray, One-Half Of First Same-Sex Couple To Marry In Illinois, Has Died

Vernita Gray, One-Half Of First Same-Sex Couple To Marry In Illinois, Has Died 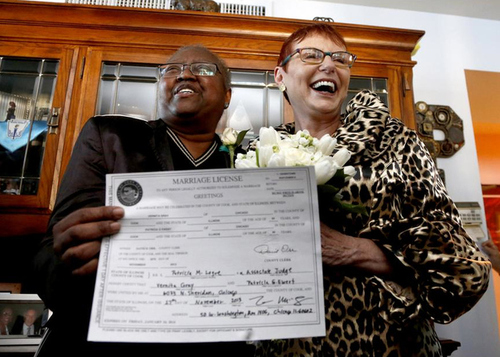 Vernita Gray, One-Half Of First Same-Sex Couple To Marry In Illinois, Has Died

Gray, who advocated for LGBT rights in Illinois for decades, paved the way for many same-sex couples to marry in the state ahead of the new marriage equality law. Vernita Gray, a longtime LGBT rights activist and one half of the first same-sex couple to marry in Illinois, died early Wednesday of cancer. She was 65.

Gray and her wife, Patricia Ewert, became the first same-sex couple to legally marry in Illinois on Nov. 27, 2013, the result of a court victory allowing them to marry months ahead of the state’s new marriage equality law due to Gray’s critical illness, brain and bone cancer.

The ruling in Gray’s case ultimately paved the way for many other same-sex couplesto marry ahead of the law’s start date, June 1. Days before the suit was filed, Gray and Ewert watched Illinois Gov. Pat Quinn sign the bill into law at a celebratory ceremony.

“Love never fails,” Gov. Quinn said at the ceremony while Gray and Ewert looked on. About a month before that, she gave a rousing speech before thousands prior to amarch for marriage equality outside the state’s capitol.

Ewert was at Gray’s side until the end, according to Windy City Times, which first reported her death. The paper offers an extensive obituary chronicling Gray’s activist work over the last four decades, such as when she started the city’s first gay and lesbian helpline from her one-bedroom apartment, and described gray as “a ubiquitous activist”:

Gray was one of those people you might run into at any kind of event and among any sort of crowd—at every Chicago Pride Parade since the first in 1970, at a community gala or fundraiser, at a women’s music festival, at a poetry slam reading her own words, or even at the White House—which she visited four times during President Barack Obama’s administrations.

In a statement on Facebook, Illinois Rep. Greg Harris, who sponsored the marriage bill in the state’s House, said Gray is a “legend” and a “hero” and inspired many to fight for equality.

A memorial service is being arranged.

“Today we mourn the passing of a fearless woman who spent her life fighting for equality and civil rights. Vernita Gray was an inspiration to all who crossed her path, from President Obama who knew her by name to the victims of violence she comforted and the young people for whom she was a fierce advocate. Her legacy can be felt in the many institutions she supported and by every LGBT couple in Illinois who is now free to marry the person they love. My thoughts and prayers are with her wife Pat Ewert, her family, and the community of friends who loved her so dearly.”

“Vernita Gray was a passionate and driven advocate for equality in Illinois. She recognized that no one should have to wait for equal rights when it comes to love. She fought for what she believed in and made a difference for people across Illinois.

Vernita was a leader in the fight for marriage equality, and a part of the anti-violence movement whose poetry resonated with so many, including President Barack Obama.

While Vernita was with us she helped spread love and strength and we are all blessed to have known and learned from her.

I join the people of Illinois in offering thoughts and prayers to her wife Pat Ewert and their family. Vernita Gray will continue to inspire all those she touched during her time here on earth and we are forever grateful.”

Breweries drop out of St. Patrick&...

Fred Phelps, Founder Of Westboro B...