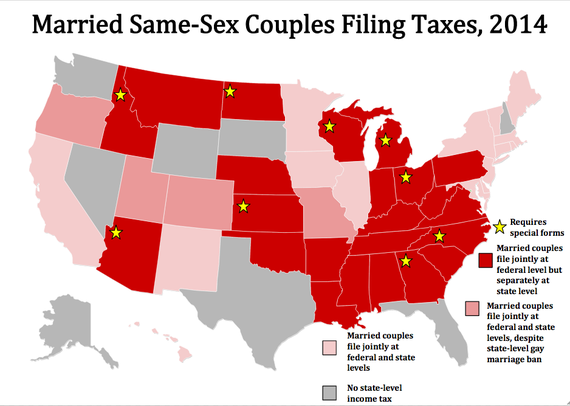 2014 will be the first time any married gay couple has ever filed federal taxes together in the United States. It’s been a decade since Massachusetts became the first state to start granting marriage licenses, and some states have previously accepted joint returns for state taxes. But until the Supreme Court struck down the federal prohibition against gay marriage in The United States v. Windsor last summer, the Internal Revenue Service didn’t recognize joint returns for married same-sex couples.

For some, this April’s tax season will be a time to celebrate the progress of the gay-rights movement. But for most couples, it will be also be a huge headache.

In gay-marriage recognition states, “thanks to the Windsor decision, doing tax returns for same-sex married couples is much easier now,” said Joan Zawaski, an accountant in California who is also in a same-sex marriage. “Married is married, we just file joint returns just like other folks. But in non-recognition states, it’s back like the battle days.”

This is because many states are refusing to accept joint returns from married gay couples, even if they were legally married in another state. Usually, states piggyback off of the IRS on tax returns—people fill out their federal returns and then use that information to fill out state returns. But since many non-recognition states aren’t following the IRS’s decision to accept joint returns from same-sex couples, their revenue departments have had to devise new ways to figure out how to collect the right amount of money from married same-sex couples. In some places, this means gay men and women have to fill out multiple forms, sometimes saying they’re married, sometimes saying they’re single. Other states have created brand new forms, just for gay couples.

But many have simply issued tax bulletins describing the ways same-sex couples will have to divide their incomes, benefits, and even claims on their children for state-tax purposes. Virginia’s five-page memo mentions that the Commonwealth does not recognize same-sex marriage or agree with the federal government’s decision to accept joint filings at least seven times.

“There were no statutory provisions in the Virginia tax code for doing that,” said Marc Purintun, a tax attorney who lives in the state. He and his husband got married in California in 2008. “On the receiving end in Virginia of the memo from the tax department, it felt pretty hostile.”

A few non-recognition states have made a very different choice: Colorado, Missouri, Oregon, and Utah will all accept married same-sex couples’ joint tax returns, even though all four have constitutional amendments against gay marriage. This is particularly interesting in Utah, where same-sex marriage was legal for 17 days in 2013 and 2014. After a federal judge ruled the state’s ban on gay marriage unconstitutional, the Supreme Court put a hold on same-sex marriage licenses until the justices decide whether they want to review the ruling. That left the 1,300 gay couples who got married during that time in something of a legal limbo, since Utah’s governor said the state would not recognize their unions. Now, at least one issue has been resolved: For tax purposes, the state considers these couples to be married.

All of this has created an interesting mix of tax policies among the states. Here’s a basic map of what married gay couples have to do to file their taxes in different states: State requirements for married same-sex couples filing taxes in 2014, based on information provided by the Human Rights Campaign (The Atlantic)

But of course, it’s not quite that simple. “The fun part is where you have one of the same-sex spouses inheriting some oil royalties from Oklahoma,” for example, said Zawaski. Oklahoma is a non-recognition state, so even if a California couple filed their taxes jointly at the federal and state levels, they would have to file separately to pay taxes on any investment income they owe to Oklahoma.

Employers have also had to figure out how to deal with their gay employees’ tax status. Some benefits, like health insurance, tuition breaks, and transportation subsidies, are not taxable income under federal law. Many companies had previously extended these kinds of benefits to same-sex couples and families if employees could prove they were part of a domestic partnership or marriage, but those couples had to pay taxes on this money. Now that federal guidelines have changed and states are issuing their own tax policies, companies have had to adjust how they handle benefits for same-sex couples. “National corporations that have employees all over the country are having a hard time keeping up,” said Purintun, who has worked with clients who have received inaccurate W-2s from their employers.

Kate Fletcher, a private-practice attorney and full-time pilot at American Airlines, said it took four months of persistent pestering to get the company to adjust her W-2. “They get to keep my money—American Airlines has given the state of Virginia money that belongs to me,” she said. Eventually, that money will be refunded, because she isn’t legally required to pay federal taxes on her benefits, but in the meantime, she could have been investing the money or using it to buy groceries or pay her mortgage.

Even though the IRS issued guidelines for same-sex couples following the Windsor case, some think the agency may be partly at fault for the confusion. For example, the agency has said that married gay couples can re-file past returns in the hopes of getting a refund, but that hasn’t been made clear to tax preparers across the country. “The IRS is telling them things like, sorry, the Windsor case is not retroactive. There’s been lots of miscommunication between taxpayers and IRS agents in the field,” said Pat Cain, a tax-law professor at Santa Clara University, who is also in a same-sex marriage.

“I would not say the IRS writ large has been trying to reach out to community organizations and make sure people are informed as possible,” said Brian Moulton, the legal director at the Human Rights Campaign. “They put out guidance, put out publications; that’s their approach.”

All of this means one thing: Even for married gay couples who live in states that recognize same-sex marriages, this filing season may involve unexpected complications. “I do think this is going to be a surprise to some people,” said Cain.

Couples in civil unions may also have issues. Even in recognition states, they have to file individually at the federal level and jointly at the state level, because the IRS does not recognize joint returns from people who aren’t technically married. This creates an interesting situation for couples living in Hawaii, for example, which just started recognizing gay marriages in December: Even though they have the option to get married, they might get better benefits and pay less tax money if they don’t.

But for many people, taxes are symbolic of the broader question of equality. While gay-rights advocates have cheered the Windsor decision and the IRS’s tax ruling, this filing season shows that gay marriages still aren’t equal to heterosexual marriages in America, no matter where you live.

“There’s certainly anger that the state wants to disregard my family and our value,” said Purintun. “The form asks are you married, and … you sign under penalties of law that what you put on the form is true.” If Purintun and his husband follow Virginia’s guidelines, they will have to file their state taxes as single, “unmarried” individuals. “I wonder how many members of the legislature or general citizens of Virginia would be willing to sign that that’s true because a tax bulletin says this is true,” he said.

Purintun and his husband haven’t decided what they’re going to do about their taxes yet; they’re hoping that Virginia may revise its guidelines before the state’s filing deadline at the end of April. “My husband says not one damned dime to them: If they’re not going to recognize our marriage, we’re going to file in the cheapest way possible,” he said. “But as a tax attorney, I think you should follow the law.”

Gay couples who live in non-recognition states have a few other options, he said, including filing their taxes with an attached letter of protest. Or, they could cross their fingers and try to file jointly—since the IRS and state revenue agencies don’t ask people to indicate their gender on filing forms, he thinks couples would probably get away with it.

“There are penalties that apply if you falsify your tax return, but would it be false if you say that you’re married in Virginia even though Virginia didn’t recognize it?” he asked. “If you’re married and likely to pay more by filing married, where’s the foul?”

It is true that most married couples who will now file jointly at the federal level will likely owe more money to the government—with a higher combined income, more of their money will be taxed at a higher bracket. But for many, this seems to be worth it.

“I’m going to pay a huge marriage tax penalty myself and I hate that, but I’m probably not going to curse as much when I’m preparing my form as I have in past years,” said Cain.

“What we’ve said as we try to convince ourselves that we have to pay more taxes is that equality is the benefit that we wanted,” Purintun said. “Equality is not necessarily free, but it is what we want.”

(Courtesy of The Atlantic.com)