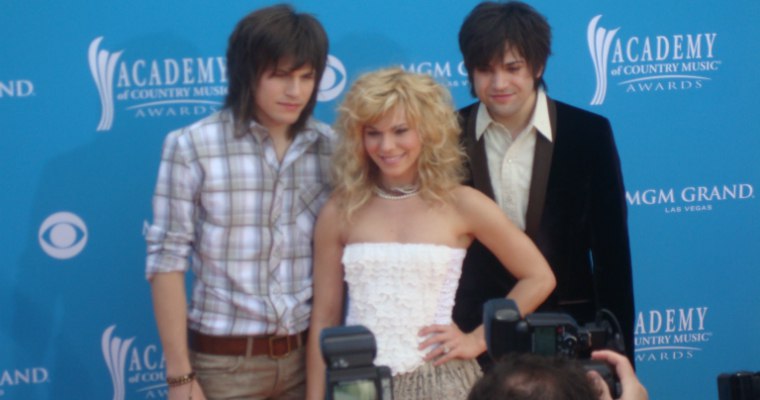 The Band Perry is set to appear in CMT Hot 20 Countdown this Saturday!

The siblings Kimberly Perry (lead vocals, guitar, and piano), Reid Perry (bass guitar), and Neil Perry (drums, mandolin, and accordion) formed their band in 2005. However, the three had been singing and playing with each other at home and with other bands before they got together. They played on the New Faces of Country tour also in 2005, and three years down the road, they met Garth Brooks’ manager Bob Doyle.

Doyle liked what he heard, and got the group into a studio to create songs. These songs, in turn, convinced Scott Borchetta and Jimmy Harnen of Republic Nashville to sign them up in 2009. One result of their studio work was their debut single, “Hip to my Heart”, which was released in November 2009.

The Band Perry hits Number One

This was followed by a self-titled EP in 2010 and their full-length debut album with the same name that was done with the help of producer Nathan Chapman and Paul Worley in the same year. This album was one of the big country hits of 2010, with the singles “If I Die Young” and “All Your Life” hitting number one. Meanwhile, “You Lie” managed to reach the Top 10.

These hits powered them them into attempting to record a second album with new producer Rick Rubin in 2012, but they then moved to producer Dann Huff, who helped them finish the album Pioneer. This was released in 2013, with the singles “Better Dig Two” and “Done” hitting number one. While their album hit the country charts and number two on the Billboard 200, they went on tour throughout North America and Western Europe.

The Band Perry wins a Grammy

In 2014, their cover of John Hartford’s “Gentle on My Mind” was featured on the soundtrack for the documentary film Glen Campbell: I’ll be Me. This version won them a Grammy for Best Country Duo/Group Performance.

In 2015, they released a more pop-oriented new single “Live Forever” from their upcoming third studio album. This single was done in collaboration pop producer RedOne, who had worked with Lady Gaga and Enrique Iglesias.

The Band Perry on their new direction

Speaking of their current direction, Kimberly told CMT, “What I know for sure is that our fans have always supported the three of us and have encouraged us to reach as far as we possibly can with our music. We are so proud of where country music’s history lies. We’re also really, really excited about the future of country.

“I feel like for the first time ever, it seems like country has no creative glass ceiling. And that’s a great thing for country music,” she added.

You can view the new single of The Band Perry below and tell us what you think of the song in the comments section:

Using the Cass Model to integrate...