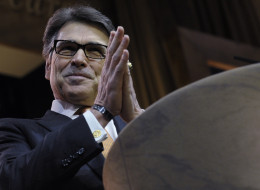 A draft of the Texas Republican Party’s new platform embraces gay conversion therapy, arguing that it is a viable option for “patients who are seeking escape from the homosexual lifestyle.”

The Texas GOP convention kicks off Thursday, and one of the tasks of delegates is rewriting the party’s platform.

The current document, adopted in 2012, sharply condemns equality for lesbian, gay, bisexual and transgender individuals. There are multiple sections dealing with the issue, including language that reads: “We affirm that the practice of homosexuality tears at the fabric of society and contributes to the breakdown of the family unit. Homosexual behavior is contrary to the fundamental, unchanging truths that have been ordained by God, recognized by our country’s founders, and shared by the majority of Texans.”

According to a draft of the new platform obtained by the San Antonio Express-News/Houston Chronicle, that language is gone. It still, however, contains a section criticizing homosexuality:

Homosexuality must not be presented as an acceptable alternative lifestyle, in public policy, nor should family be redefined to include homosexual couples. We believe there should be no granting of special legal entitlements or creation of special status for homosexual behavior, regardless of state of origin. Additionally, we oppose any criminal or civil penalties against those who oppose homosexuality out of faith, conviction, or belief in traditional values. We recognize the legitimacy and value of counseling which offers reparative therapy and treatment to patients who are seeking escape from the homosexual lifestyle. No laws or executive orders shall be imposed to limit or restrict access to this type of therapy.

Gay conversion therapy assumes that being gay is a choice. (It’s not.) Major health organizations have also rejected conversion therapy, concluding that it can cause significant physical and psychological harm. New Jersey and California both ban the practice on minors.

The platform also contains sections endorsing the federal Defense of Marriage Act, which defines marriage as being between one man and one woman. The U.S. Supreme Court struck down a major portion of that law last year, paving the way for judges around the country to declare marriage equality legal. There are now 19 states plus the District of Columbia where same-sex marriage is allowed.

The vast majority of state Republican platforms still contain anti-gay language. According to a count by The Huffington Post, only seven states plus the District of Columbia have no mention of opposition to same-sex marriage or other rights for LGBT individuals in their party platforms.

As the Houston Chronicle reports, the platform is far from completed. The draft is being amended by a committee of 31 delegates; the process is expected to wrap up late Thursday. Another group of delegates will then have to review that new draft, before the final document goes up for approval on the floor later this week.

Young Conservatives for the Freedom to Marry, a group of pro-marriage equality Republicans, is working to change the national Republican platform in 2016 and get rid of the anti-gay language.

Even before the Texas state GOP convention began, there was controversy surrounding the issue of gay rights.

Last week, Republican gay rights organizations called out the Texas Republican Party for denying them the chance to put up booths at the event.

State GOP chairman Steve Munisteri confirmed to The Huffington Post that the two groups, the Log Cabin Republicans and Metroplex Republicans, were denied space. The issue, he explained, is that their position runs counter to the current party platform. A policy was established at the last convention that groups wanting to set up booths can’t advocate for positions that contradict the platform.