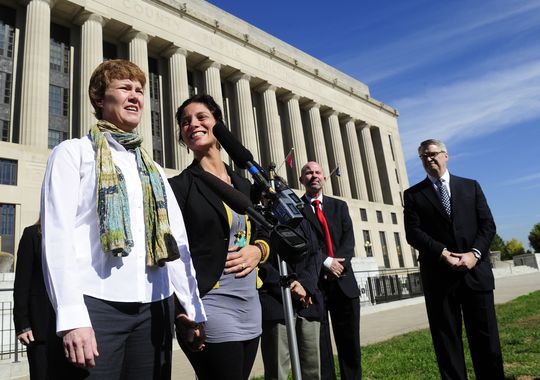 CINCINNATI — The broadest attack yet on states’ gay marriage bans will be Wednesday in a packed courtroom in downtown Cincinnati, where lawyers challenging four states’ prohibitions will stand shoulder to shoulder in hopes of convincing a three-judge panel that the bans are unconstitutional.

The states – Ohio, Kentucky, Michigan and Tennessee – have so far waged their battles separately, fighting to uphold the bans that voters years ago embraced. Each state faces slightly different challenges filed by same-sex couples, including the right to adopt children as a couple, to have their names placed on a partner’s death certificate and to have their marriages – performed legally elsewhere – recognized in the states they call home, where same-sex marriage is illegal.

Despite the variations in the attacks, make no mistake: The ultimate targets are the bans, and the real goal is the right to marry, adopt children and enjoy the same rights that opposite-sex couples have when they exchange vows.

“Putting all of the arguments on the same day back-to-back is certainly unusual and actually a very good move,” said Al Gerhardstein, the lawyer heading the challenge to Ohio’s same-sex marriage ban. “That way the panel gets the benefit of all the arguments at once, giving them a chance at harmonizing the law in this area.”

For gay rights advocates throughout the region, years of incremental challenges in federal court have led to Wednesday’s big day in the 6th Circuit Court of Appeals. Several rallies are planned Tuesday in Cincinnati.

Gay rights organizations are optimistic that the panel will uphold the decisions made by federal judges in each case – the decisions that the states have appealed, landing the cases in the appellate court. They have momentum on their side: Every legal challenge since the U.S. Supreme Court last June struck down part of the federal Defense of Marriage Act, which defined marriage as between a man and a woman, has chipped away at gay marriage bans nationwide.

No one is declaring premature victory, though. Two of the three judges who will decide the fate of the four states’ challenges are Republican appointees, and the extraordinary winning streak could come to a halt. Kent Ostrander speaks at the rally against domestic partner benefits at universities in the rotunda in the Capitol Building in Frankfort, Ky.(Photo: AP photo)

Plenty of court watchers hope so.

“Across the nation, it is tantamount to martial law on state marriage policies when relatively few federal judges are overturning marriage amendments that millions of people have voted upon and decided,” said Kent Ostrander, executive director of Family Foundation of Kentucky, which opposes gay marriage.

Two of the three appellate judges to consider the bans’ fate were appointed by President George W. Bush, including one whose nomination was opposed by liberal groups who deemed him a threat to civil rights.

That judge, Jeffrey S. Sutton, is a states’ rights advocate who has argued against federal laws protecting people with disabilities, women and minorities. In 2012, he wrote an opinion for the appellate court that reinstated a suit filed by an evangelical Christian who lost her spot in a counseling program at a Michigan university for refusing to work with clients in same-sex relationships.

He joins judges Deborah L. Cook, a Bush appointee, and Martha Craig Daughtrey, who was appointed by President Bill Clinton.

The political divide is noteworthy: Two other appellate panels have already ruled in gay-marriage ban cases with 2-1 decisions.

Legal experts caution against using the judges’ backgrounds to determine how they’ll rule.

“That’s too simplistic of an analysis,” said Pierre Bergeron, a lawyer who has argued cases before all three 6th Circuit judges on the panel. “What you see is courts across the country, regardless of ideological perspective, striking down the gay marriage ban. Certainly there’s an element of liberal-conservative to it, but I don’t think that’s going to be the driver at the end of the day.”

For example, Sutton in 2012 authored an opinion upholding the federal Affordable Care Act.

“Sutton is going to vote the way that makes sense to him,” said Andrew Koppelman, a law professor at Northwestern University. “He is likely to be more resistant to partisan pressure than most judges.”

If their political affiliations tell little, the questions they pose Wednesday – and even their facial expressions as they ask them – should speak volumes, Bergeron said.

“They don’t hide their views at oral arguments,” he said. “I think we’ll have a sense of which way they’re leaning based on the questions that arise in oral arguments.” In this Monday, Oct. 21, 2013, file photo, Dr. Sophy Jesty, left, and Dr. Valeria Tanco, of Knoxville, Tenn., speak outside the Davidson County courthouse in Nashville, Tenn. The couple, married in New York in 2011, are part of a group that filed a lawsuit to force Tennessee to recognize same-sex marriages from other states where it is legal.(Photo: Shelley Mays, AP)

Wednesday’s hearing will be a three-hour marathon of arguments from each state, beginning with Michigan, then followed by Ohio, Kentucky and Tennessee.

It seems perhaps an unlikely backdrop for rallies and celebrations, but that’s what gay rights advocates are planning.

“This is a seminal moment in all of our nation’s LGBT movements,” said Chris Hartman, director of the Fairness Campaign of Kentucky.

Some of the arguments made by the states will overlap, but not all. For example, lawyers representing Kentucky are arguing that gays shouldn’t marry because only opposite-sex couples can procreate and maintain the state’s birth rate and economy. The ban, the state argues, ensures the “existence of the human race.”

That argument – made by outside counsel hired by Gov. Steve Beshear after Kentucky Attorney General Jack Conway refused to defend the state’s ban – was ridiculed by U.S. District Court Judge John G. Heyburn II as “illogical” and “bewildering” in his earlier ruling.

Lawyers in the other three states have largely attacked the bans on constitutional grounds, saying they violate gays’ right to equal protection. All four states argue that the issue should be left up to the states and not the federal government.

The appellate panel might not be the last stop for these four states. Most onlookers agree that ultimately, the U.S. Supreme Court likely will rule on a state-level gay marriage case to decide once and for all whether individual states may ban the unions or whether the entire country must recognize them.