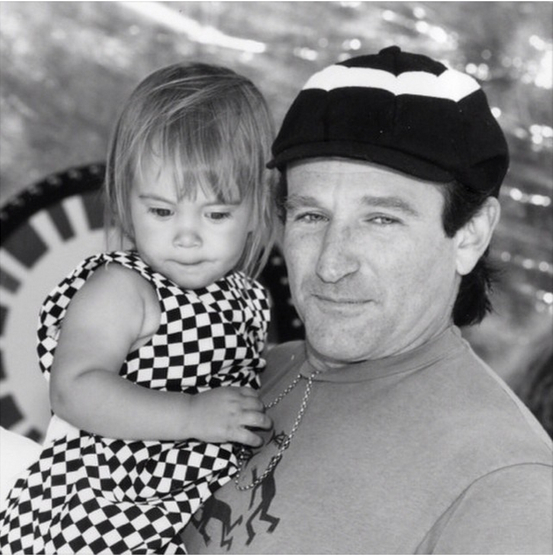 Robin Williams, the beloved actor who died of an apparent suicide Monday, posted a touching photograph on Instagram two weeks earlier that showed him holding his daughter, Zelda Rae Williams, when she was a young child:

Williams, who was 63 years old, is survived by three children: Zachary, 31; Zelda, 25, and Cody, 22. Zelda is also an actress. His wife, graphic designer Susan Schneider, with whom he lived in the San Francisco Bay Area, said in a statement Monday that she was “utterly heartbroken.”

“This morning, I lost my husband and my best friend, while the world lost one of its most beloved artists and beautiful human beings,” she added. “As he is remembered, it is our hope that the focus will not be on Robin’s death but on the countless moments of joy and laughter he gave to millions.”

Fans took to Williams’ Instagram page to express their own grief, and dozens of celebrities paid tribute on Twitter.

According to his publicist, the actor had been suffering from severe depression. Last month, HuffPost confirmed Williams had checked into a rehab facility in Minnesota in what representatives said was an effort to maintain his sobriety.