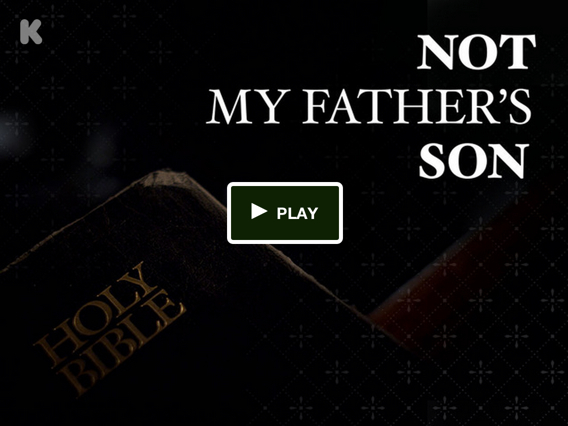 Nate Phelps grew up in a physically and mentally abusive household headed by Fred Phelps, the founder of the hate group known as the Westboro Baptist Church. Since escaping the toxic environment of the ‘church’ known for its trademark slogan of “God Hates Fags,” Phelps has devoted his life to being an advocate for LGBT acceptance.

The upcoming documentary “Not My Father’s Son” will give unique insight into the inside workings of the WBC, chronicling Phelps’ journey from his abusive childhood to his eventual departure which cut him off from his family.

In the trailer for the film, Phelps matter-of-factly provides a chilling voiceover that explains what his childhood was like:

So, my father used what was called a “mattock handle.” It was a large piece of wood about four-and-a-half feet long and it had about a thirteen, fourteen-inch circumference. And he would swing that like a baseball bat when he was beating one of the kids. And he did it such that he would hit us five or ten times, and then he would scream at us about what we’d done wrong, and how we were going to go to Hell for it, and how God hated sinners, and in the Old Testament times I would have been taken out of the city gates and stoned because I was disobedient. This was the kind of rhetoric that we heard, and then he would go back to the physical beating and he would work himself up into this frenzy. And it would be bad enough that you literally couldn’t sit down, or lie down on your backside for two or three days.

Co-directors Brad Johnson, Terrie Johnson, and Jason Badgett are raising money to produce the film via a Kickstarter page. Brad Johnson told The Daily Beast, “We’ve been doing this on our own time and our own dime. Now we’re tapped out.”

The filmmakers hope to provide hope to others growing up in abusive environments, particularly as people abused as children are at a higher risk of growing up to be abusers later in life. “Nate’s escape from the abusive and hateful environment in which he was raised coupled with his quest to break the cycle of abuse and hate for future generations create a poignant and powerful theme for the film,” explains the Kickstarter page.

Phelps isn’t the only young person to break free from the Westboro Baptist Church. His relatives Megan, Grace, and Zach Phelps-Roper (among others) have all renounced the ideals of WBC and are speaking out for tolerance and love. This documentary will provide a long, hard look at the the life-long struggles they’ve had to face.

Last US State To Be Sued, North Da...