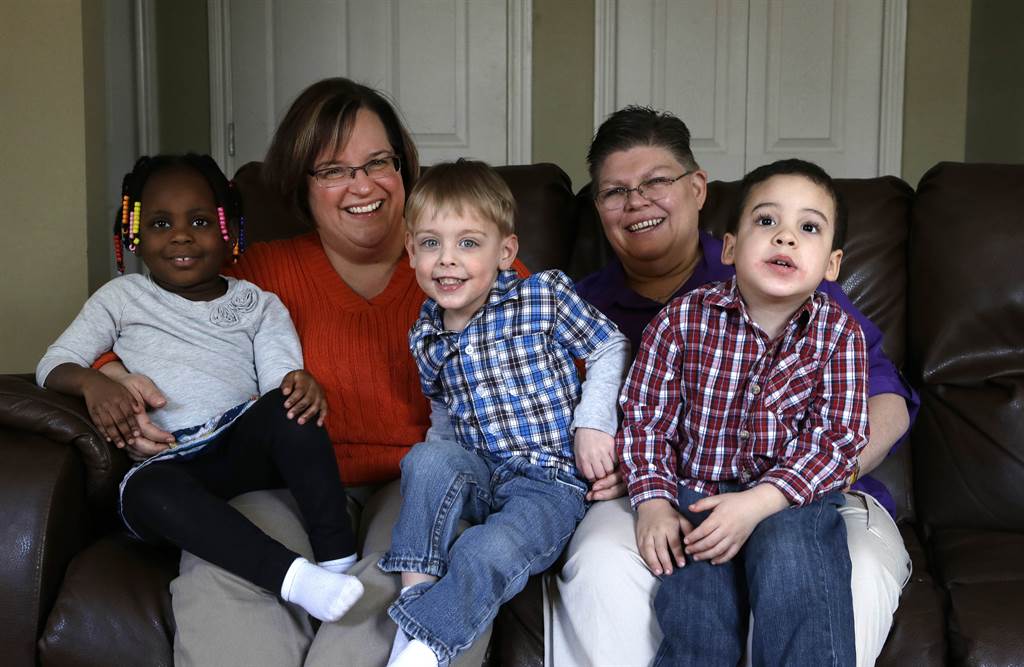 MASON, Mich. (AP) — Two women were the first gay couple to marry in Michigan on Saturday, one day after the state’s ban on gay marriage, approved by voters in a landslide in 2004, was scratched from the state constitution by a federal judge.

Glenna DeJong, 53, and Marsha Caspar, 51, both of Lansing, were married by Ingham County Clerk Barb Byrum in Mason just after her office opened at 8 a.m. Saturday. Byrum said it was an honor to marry same-sex couples who have waited too long for this day.

“I figured in my lifetime it would happen,” Caspar said. “But now, when it happens now, it’s just overwhelming. I still can’t believe it. I don’t think it’s hit me yet.”

DeJong and Caspar have been together for 27 years. DeJong called it a day of “sheer joy,” adding that Michigan should not “waste taxpayer dollars and cause more turmoil” by pursuing a stay on gay marriage as Attorney General Bill Schuette did immediately after Friday’s ruling.

Clerks who handle marriage licenses in Michigan’s 83 counties said they would start granting them to gays and lesbians — at least three as early as Saturday. DeJong and Caspar first learned the courthouse would be open after Byrum tweeted about it early Saturday morning.

It isn’t known when a federal appeals court in Cincinnati will respond to Schuette’s request for a stay while an appeal is pursued. He noted Friday that the U.S. Supreme Court stepped in and suspended a similar decision in January that struck down Utah’s gay-marriage ban.

“A stay would serve the public interest by preserving the status quo … while preventing irreparable injury to the state and its citizens,” he said.

Seventeen states and the District of Columbia issue licenses for same-sex marriage. Since December, bans on gay marriage have been overturned in Texas, Utah, Oklahoma and Virginia, but appeals have put those cases on hold.

The historic decision by U.S. District Judge Bernard Friedman, who said the ballot box is no defense to a law that tramples the rights of same-sex couples, followed a two-week trial that explored attitudes and research about homosexual marriage and households led by same-sex couples.

The attorney general’s office emphasized the 59 percent approval by voters as well as tradition and child-rearing as reasons why the 2004 amendment should stand. Friedman, however, wasn’t swayed.

He praised April DeBoer and Jayne Rowse, two Detroit-area nurses who are raising three children with special needs. They filed a lawsuit in 2012 because they’re barred from jointly adopting each other’s children. Joint adoption is reserved for married heterosexual couples in Michigan.

“In attempting to define this case as a challenge to ‘the will of the people,’ state defendants lost sight of what this case is truly about: people,” the judge said.

“It is the court’s fervent hope that these children will grow up ‘to understand the integrity and closeness of their own family and its concord with other families in their community and in their daily lives,'” Friedman said, quoting the Supreme Court. “Today’s decision is a step in that direction, and affirms the enduring principle that regardless of whoever finds favor in the eyes of the most recent majority, the guarantee of equal protection must prevail.”

DeBoer and Rowse said Friday that they’ll get married when the case ends, a process that could take years with appeals.

“We don’t want to speculate what’s to come. … We want to get married. We will be getting married — when we know that our marriage is forever binding,” DeBoer said.

The 31-page decision was filed in Detroit’s federal court shortly after 5 p.m., when most county offices were closed and couldn’t issue licenses. Ingham, Washtenaw, Oakland and Muskegon counties said they would be open Saturday. Others will follow suit Monday.

Dave Murray, a spokesman for Republican Gov. Rick Snyder, said the state has an “obligation” to defend what voters chose a decade ago.

If a “court concludes the provision of the Michigan Constitution cannot be enforced, he’d respect those decisions and follow the rule of law,” Murray said of Snyder.

While DeJong and Caspar were the first couple to wed after getting a Michigan license, it was not the first same-sex wedding to occur in the state. Two men became spouses a year ago during a ceremony at a northern Michigan Indian reservation after the tribal chairman signed a measure approving same-sex marriage.

Fred Phelps, Founder Of Westboro B...