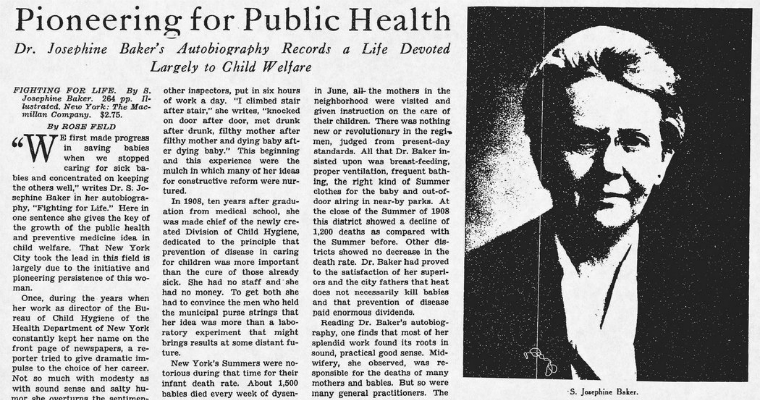 If there was a superlesbian among lesbians, we believe that would be Sara Josephine Baker, a doctor who not only saved 90,000 children but also revolutionized American public health care.

Aside from being a lesbian, Baker was a feminist and a suffragist who stared down gender discrimination and the male disregard of women physicians of that period.

She also managed to chase down the infamous ‘Typhoid Mary’ twice, once bringing her to the hospital in an ambulance by sitting on her.

Born in Poughkeepsie, New York in 1873, Baker grew up as a happy child. However, when her father and brother died, she had to apply to medical school in order to support her family.

She was one of the first generation of women to attend medical school at the Woman’s Medical College of the New York Infirmary.

This school was founded by physicians and sisters Emily and Elizabeth Blackwell, the latter known as America’s first woman doctor.

Because Baker failed a course, “The Normal Child,” taught by pioneering health educator Annie Sturges Daniel, she had to retake the class.

She eventually became fascinated with what she called “that little pest, the normal child.”

Afterwards, she served a year as an intern at the New England Hospital for Women and Children in Boston.

While working at the outpatient clinic for the city’s poor residents, she saw the connection between poverty and ill-health.

Because her private practice wasn’t paying as much, she worked part time as a medical inspector for New York City.

It was there she won the support of the health commissioner and the reform-minded New York Mayor George McClellan. For her efforts, she was put in charge of the Health Department’s first ever Bureau of Child Hygiene.

Thanks to her previous work on disease prevention and education, she came up with programs on basic hygiene for immigrants living in Hell’s Kitchen and other slum tenements.

She also set up baby health stations that not only distributed free milk but also helped in midwife training and regulation.

All in all, Baker created the policies that would later affect not only New York City’s maternal and infant mortality but also influenced 35 states in implementing versions of her school health program.

Baker– in her masculine-tailored suits– radiated toughness and who persevered with the help of other strong-willed women.

Aside being taught by pioneering women doctors, she was also part of the Heterodoxy Club, a group of more than 100 free-thinking and free-spirited women.

‘Doctor Jo’, as she was called (something she consciously modeled on Jo of Little Women), handled everything from drunk husbands to corrupt bureaucrats.

One anecdote about Baker was that a fellow colleague complained to her about female doctors and she reportedly told him, “What kind of creature do you think you are talking to now?”

The man replied, “I’d entirely forgotten that you were a woman.”

Baker retired in New Jersey in 1923 with her life partner, novelist Ida Wylie, and another woman physician, Louise Pearce. She died in 1945.