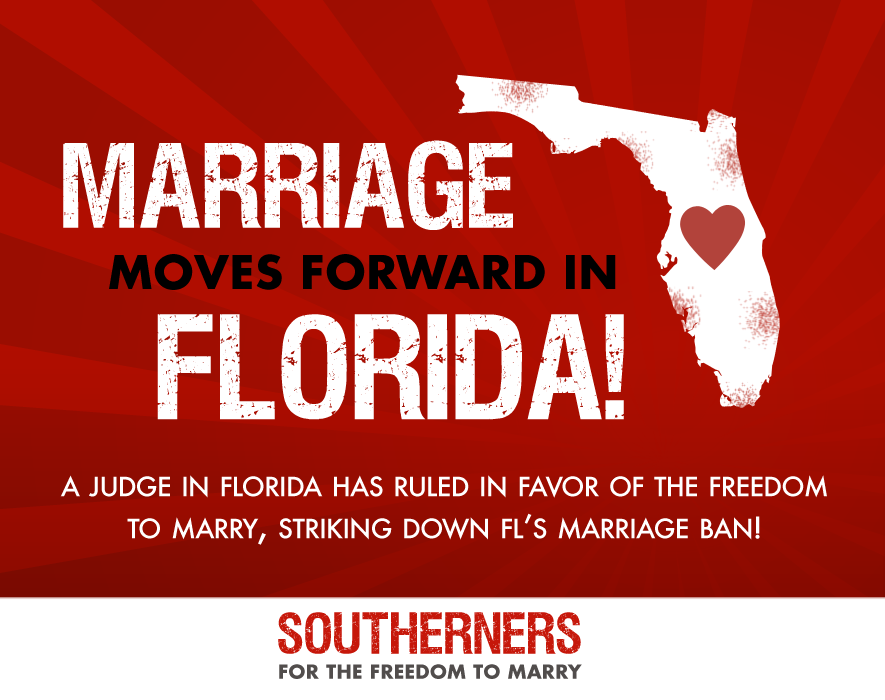 Today, July 17, a judge in state court struck down Florida’s ban on marriage for same-sex couples, marking the 25th consecutive ruling in favor of the freedom to marry (with no rulings against) since June 2013.

Chief Circuit Judge Luis Garcia ordered the Monroe County Clerk to stop enforcing Florida’s anti-marriage constitutional amendment, saying that marriage licenses should begin being issued in Monroe County on July 22. For now, the ruling only applies to Monroe County. The ruling does not require the state of Florida to respect the marriages of same-sex couples legally performed in other states.

The ruling is in Huntsman v. Heavilin, a case brought in Monroe County court in April 2014 by private counsel from Restivo, Reilly & Vigil-Fariñas LLC on behalf of Aaron Huntsman and Lee Jones, a same-sex couple together for more than a decade in Key West, FL. The couple spoke with Freedom to Marry and Equality Florida earlier this month. Read their story HERE.

Judge Garcia writes in his ruling:

Like an unprecedented wave of state and federal courts across the country this past year, Judge Garcia did the right thing in affirming that committed same-sex couples share in the precious constitutional freedom to marry the person we love. Florida’s same-sex couples and their loved ones want what all families want: joy, protections, security, and respect – just what the freedom to marry is all about. We can now add Florida’s voice to the urgent need for the Supreme Court to take a freedom to marry case and bring the entire country to national resolution, ending marriage discrimination across America.

(Courtesy of Freedom To Marry)

It's All Female Leaders in th...