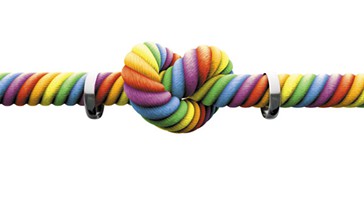 PORTLAND, Ore. — A federal judge on Monday struck down Oregon’s voter-approved ban on gay marriage, saying it is unconstitutional. U.S. District Judge Michael McShane said the ban unconstitutionally discriminates against same-sex couples and ordered the state not to enforce it. State officials earlier refused to defend the constitutional ban in court.

McShane joined judges in seven other states who have struck down gay marriage bans, though appeals are underway.

Oregon state officials have said they’d be prepared to carry out same-sex marriages almost immediately, and couples lined up outside the county clerk’s office in Portland in anticipation of McShane’s decision.

Laurie Brown and Julie Engbloom arrived early Monday at the Multnomah County Building to form the line for marriage licenses. The two have been a couple for 10 years. Engbloom proposed in April, when they celebrated their anniversary by climbing Smith Rock in Central Oregon.

“We always knew we wanted to spend our whole life together,” Brown said. “This opportunity has come, it feels right, everything has fallen into place.”

Four gay and lesbian couples brought the Oregon cases, arguing the state’s marriage laws unconstitutionally discriminate against them and exclude them from a fundamental right to marriage.

Democratic Attorney General Ellen Rosenblum refused to defend the ban, saying there are no legal arguments that could support it in light of decisions last year by the U.S. Supreme Court. She sided with the couples, asking the judge to overturn the ban, and says she won’t appeal.

The judge denied a request by the National Organization for Marriage to defend the law on behalf of its Oregon members. A panel of the 9th U.S. Circuit Court of Appeals on Monday refused the group’s request for an emergency stay of that decision, allowing same-sex marriages to proceed.

Gay rights groups previously said they’ve collected enough signatures to force a statewide vote on gay marriage in November. But they said they would discard the signatures and drop their campaign if the court rules in their favor by May 23.

The U.S. Supreme Court last year struck down the 1996 Defense of Marriage Act, which barred the federal government from recognizing same-sex marriage. It determined the law improperly deprived gay couples of due process.

In addition to Oregon, federal or state judges in Idaho, Oklahoma, Virginia, Michigan, Texas, Utah and Arkansas recently have found state same-sex marriage bans to be unconstitutional. Judges also have ordered Kentucky, Ohio and Tennessee to recognize same-sex marriages from other states.

But opposition remains stiff in many places. Critics note most states still do not allow gay marriage and that in most of those that do, it was the work of courts or legislatures, not the will of the people.

Oregon law has long prohibited same-sex marriage, and voters added the ban to the state constitution in 2004. The decision, approved by 57 percent of voters, came months after Multnomah County briefly issued marriage licenses to same-sex couples. Multnomah is the state’s largest county and includes Portland.

About 3,000 gay couples were allowed to marry before a judge halted the practice. The Oregon Supreme Court later invalidated the marriages.