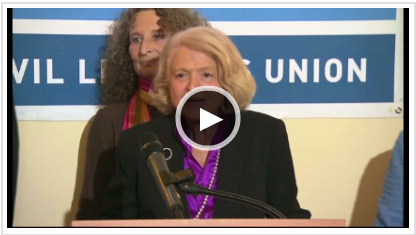 Plaintiff Edie Windsor speaks to reporters after the U.S. Supreme Court ruling on the Defense of Marriage Act.

Edith Windsor, who filed the original case that could upend the Defense of Marriage Act, says just getting the case to this point is a kind of victory.

“We’ve made a huge step forward and a huge difference in how people look at us,” she said. “And so, it’ll happen. Another year if not now.”

It was the death of Windsor’s life partner, Thea Clara Spyer, that led to the case.

Theirs was not a fleeting romance — the women were together 42 years sharing ups and downs, laughs and tears. They also shared what they’d earned together, including from Windsor’s job as a programmer with IBM and Spyer’s work as a psychologist.

—-
Washington (CNN) — In a dramatic slap at federal authority, a divided Supreme Court has struck down a key part of congressional law that denies to legally married same-sex couples the same benefits provided to heterosexual spouses.

The Defense of Marriage Act (or DOMA) defines marriage as only between a man and a woman.
The vote Wednesday was 5-4.

“Although Congress has great authority to design laws to fit its own conception of sound national policy, it cannot deny the liberty protected by the Due Process Clause of the Fifth Amendment,” said Justice Anthony Kennedy.