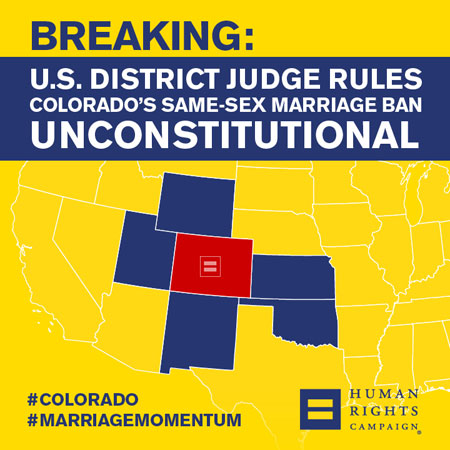 “Today’s ruling from Judge Moore provides even further confirmation that Colorado’s ban on marriage equality is unconstitutional,” said HRC Legal Director Sarah Warbelow.  “Through civil unions, Colorado has already recognized the need for same-sex couples to have equal access to the benefits and obligations of marriage. Now it’s time for the state to stop its appeal and allow these families the dignity that comes with full marriage equality.”

There are over 70 court cases challenging discriminatory marriage bans across the country in 30 of the 31 states where such a ban exists, plus Puerto Rico. Cases from eleven states are currently pending before five federal appeals courts. The Sixth Circuit holds the distinction of being the only federal appeals court to date that will consider marriage cases from all states within its jurisdiction.  In total, 33 states either have marriage equality or have seen state marriage bans struck down as unconstitutional in court.  Since the Supreme Court’s historic marriage rulings last year, there have been 18 consecutive federal court decisions that bans on marriage equality are unconstitutional.  These rulings have come from judges appointed by both Democrat and Republican presidents.

Gallup puts support for marriage equality at 55 percent – an astonishing 15 points increase from just 5 years ago – with other polls showing support at even higher margins.  And support for same-sex marriage rights continues to grow in virtually every demographic group.  According to ABC News / Washington Post, 77 percent of adults under age 30 favor marriage equality.  40 percent of Republicans – an all-time high and jump of 16 points in under two years – now support marriage for gay and lesbian couples, while the number of Catholics supporting marriage has grown to 62 percent, according to the New York Times.  These numbers continue to grow, with no indication that support will slow down.

Same-sex couples can legally marry in nineteen states and the District of Columbia, while 31 states have a law or constitutional amendment restricting marriage to the union of one man and one woman.  Learn more about this and other marriage equality cases at www.americansformarriageequality.org