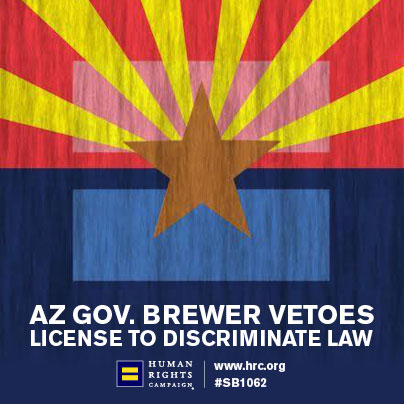 Today Arizona Governor Jan Brewer vetoed a recently-passed bill that would have allowed businesses to refuse services to the lesbian, gay, bisexual and transgender (LGBT) community on the basis of religious freedom.  This morning, HRC delivered 65,000 petition signatures to Gov. Brewer calling on her to veto the bill.  The so-called Religious Freedom Restoration Act could have been used to protect businesses that discriminate not only against the LGBT community but also unmarried women or veterans, among other groups.

“With today’s veto, Governor Brewer spared her state from institutional discrimination and economic catastrophe. Make no mistake, there is no better way to doom jobs in a state than by signing license-to-discriminate bills,” said HRC President Chad Griffin.  “The bipartisan outpouring of opposition to this bill is all the proof you need that this country isn’t turning backwards. Governor Brewer did the right thing in stopping this assault on businesses and the LGBT community and we call on her and the legislature–and governors and legislators in other states–to resist any attempt to give license to discrimination.”

Last week HRC called on Gov. Brewer to veto the measure, as did a number of prominent Arizonans like Sen. John McCain and Sen. Jeff Flake, as well as the Arizona Chamber of Commerce and Industry, the Arizona Tech Council, dozens of faith leaders from across the state, major corporations including AT&T, PetSmart, American Airlines, Delta Airlines, Apple, and even the Arizona Super Bowl Host Committee and the Arizona Cardinals.

Americans overwhelmingly believe that businesses should not be able to deny services to someone because they’re gay or lesbian:

•   According to a poll by Third Way and the Human Rights Campaign 69 percent of Americans don’t think a business owner should be allowed to refuse to provide products or services to an individual because that person is gay or lesbian, compared to an incredibly small 15% that do. And when asked about small business owners in particular, a full 68% of Americans don’t think they should be able to refuse service to gays or lesbians, regardless of their religious beliefs. This supermajority included 55% of Republicans, 75% of Independents, 67% of people without college degrees, and 68% of Christians.

Because the language is so broad, any individual, corporation, institution, or business organization may have been able to justify discrimination against LGBT individuals by claiming a religious belief. Potential examples include:

•   Employees may potentially bring litigation against employers who are enforcing internal nondiscrimination policies or municipal laws.

HRC has been on the ground in Arizona getting Arizona’s leading business and faith leaders to sign on to letters calling on the Governor to veto the bill, and we will continue to work against any reintroduction of this legislation or modified versions that allow businesses to discriminate.