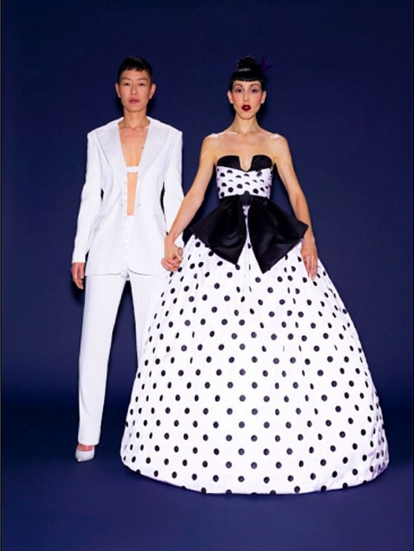 Angelina Jolie is married, and so is her ex-girlfriend, Jenny Shimizu.

Shimizu recently wed brand consultant Michelle Harper, according to Us Weekly. On Wednesday, photos of Harper wearing a voluminous wedding dress on Aug. 22 in the Soho neighborhood of New York City surfaced via Splash photo agency.

Shimizu, a former Calvin Klein model, met Harper in 2012 at a party, per a New York Times profile on Harper, a club kid-turned-businesswoman.

The two were recently featured in Vogue magazine wearing what Harper described in a June Instagram post as some “cray fun wedding garb.”

“I probably would have married Jenny Shimizu if I hadn’t married my husband [Jonny Lee Miller],” Jolie told Girlfriends magazine in 1997. “I fell in love with her the first second I saw her. Actually, I saw when she was being cast in ‘Foxfire,’ and I thought she had just read for my part. I thought I was going to lose the job. I said to myself, ‘Oh, my God, that’s Legs.’ She’s great. We had a lot of fun.”

After failed marriages to Miller and Billy Bob Thornton, Jolie wed Brad Pitt on Aug. 23. The stars began dating in 2005 and have six children.

Two women in their 90s get hitched...