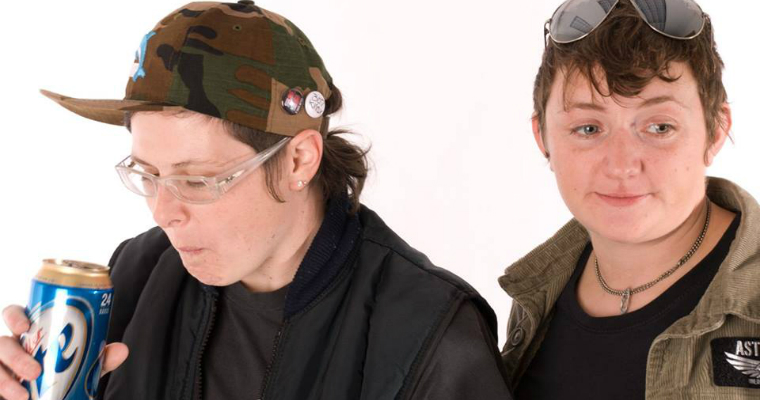 With the death of lead singer and songwriter Meghan Galbraith earlier this year at the age of 35, it was thought that was it for the Chicago queercore outfit 8 Inch Betsy.

Fortunately, 307 Knox Records will posthumously issue the group’s last album The Mean Days this November 13, the goodbye album of “the coolest female fronted queer band” as dubbed by NYLON.

8 Inch Betsy and The Mean Days

Though the band members– Galbraith (guitars, vocals), Eli Burke (bass), and Melissa Thomas (drums)– identified as queer, the songs of The Mean Days encompassed the human condition, from failed relationships to the longing for things lost.

Lastly, this album will be Galbraith’s legacy, the songs that she wrote signifying her love and camaraderie, as well as the secret moments in her life done as rock anthems.

“Our songs are inspired by life experiences, relationships and everything that you can’t say out loud,” Galbraith said in an interview with Ohio State newspaper The Lantern.

“Recording The Mean Days was easy and fun. We wanted to give the album a live feel, so we’d just do a few runs of each song, then we’d tweak it here and there over time,” Burke said, describing how the last album was created.

“Part of the problem came from a falling out with our original drummer. It was hard finding a replacement with a similar skill set. Christian [Moder] really killed it on this album as a session drummer, but we still needed to find someone to be full time,” Burke added.

Fortunately, 8 Inch Betsy found the right one with Melissa Thomas, head of 307 Knox Records. She believed in the band, fought to get them on her label– and was their drummer until the end.

“I had some of the best times of my life on the road with Meghan and Eli. I feel privileged to have spent so much time with such talented people,” Thomas said.

8 Inch Betsy toured the US many times, playing with indie bands like The Gossip, Girl in a Coma, Marnie Stern, Sybris & Jucifer, as well as big names like Cyndi Lauper and Indigo Girl Amy Ray.

Likewise, their single, “Doomed,” was picked for inclusion in Xbox’s celebrated Rock Band game. The band was also featured in outlets such as Curve, GO Magazine, After Ellen, and The Chicago Tribune.

But Galbraith– with her imposing figure, huge mohawk, and neck tattoos– was the heart and soul of the band. She left an indelible mark in the lives of the people around her, in the neighborhood where she lived in, and in the music community as well.

“She’d be a mirror. She’d be the person you needed to talk to at any given moment. She’d give and give and give until there was nothing left. She had a million friends, but only her inner circle was privy to how sensitive she was and how she carried that empathy like a badge,” Burke said.

“She told me once that she carried a flag for every girl she’s ever dated. I asked her how she could live like that. She just said that she didn’t have a choice,” Burke added.

As the last studio album of 8 Inch Betsy, The Mean Days has tracks peppered with Galbraith’s laughter, her burps, and her beautiful voice.

In these songs, you can hear her: sometimes light, feminine and delicate, other times growling, brutal and hard as nails– sometimes both simultaneously as she sings her own harmonies.

“Now that there’s no more 8 Inch Betsy, I feel good in the fact that I’ll be bringing the gospel of Meghan and 8 Inch Betsy to the people by releasing this album,” Thomas said. (PR)

Check out this track from 8 Inch Betsy’s The Mean Days in the video below:

A dummy's guide to the perfec...