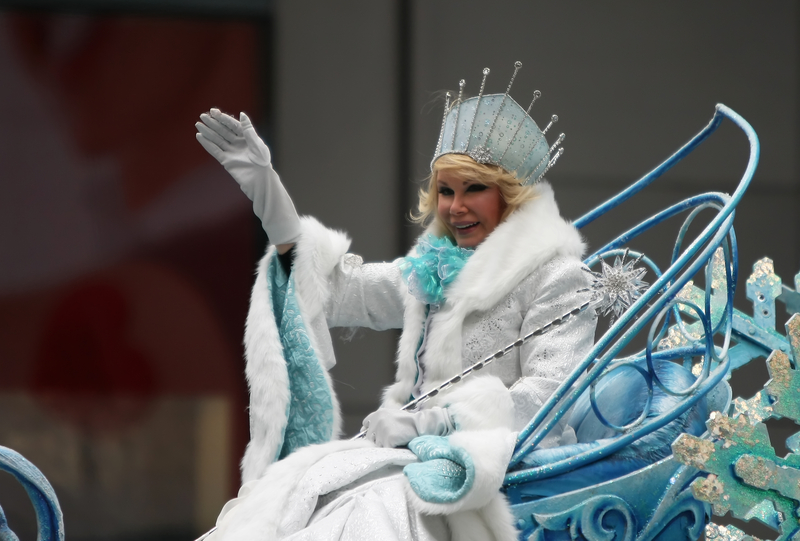 Our hearts collectively broke earlier today when we learned that Joan Rivers passed away at the age of 81.

The gay icon reportedly stopped breathing during a procedure on her vocal cords at a clinic last week and had been in and out of intensive care since the incident.

While remembering Rivers’ groundbreaking career, it must be noted that her contributions to the lesbian, gay, bisexual and transgender (LGBT) community and queer visibility were massive. In honor of the legendary comedian, we present to you six of our favorite queer moments from Joan Rivers’ life. Our thoughts are with her family and friends.

Last month Rivers officiated a gay wedding at New York’s Plaza Athenee — and it wasn’t her first. In 2013 the comedian also presided over a King Kong-themed ceremony on top of the Empire State Building. “Every wedding I officiate has a cover charge and a two-drink minimum,” she joked.

Joan On Kissing A Woman

In early 2013, Rivers opened up on NBC’s “Today Show” about a recent kiss she shared with a woman. “It was in the moment,” Joan explained. “I like her very much. It’s like the Katy Perry song, ‘I Kissed a Girl.’ I don’t know if I liked it or I didn’t like it. I woke up this morning with an incredible urge to play golf.” She later told HuffPost Live, “I wasn’t for her. To be rejected by both sexes? That’s a heartbreak!” You could always keep us cracking up, Joan.

Rivers used her talk show, “The Joan Rivers Show,” in the ’90s to provide visibility to the LGBT community in a way that had rarely been done before. In this clip, the gay icon hosted a segment with Leigh Bowery, Michael Alig, James St. James, Ernie Glam and Amanda Lepore — the Club Kids and some of the most prominent queers in the community at the time.

Rivers has never been a stranger to expressing her deep affection for gay men and the gay community as a whole. While discussing the Occupy Wall Street movement, the self-described “queen of the gays” once joked, “Gay men have better bodies, on the whole. That’s number one, and number two: They care more about what they look like. Very seldom will you find a gay schlep. This is why there are no gay protesters in Zuccotti Park. Because there’s no place to change, and no closets.”

Always one to cheer on queers on their journey to becoming their authentic selves, Rivers publicly congratulated CNN’s Anderson Cooper following his coming out. “I am thrilled that Anderson Cooper finally came out, because this explains why he never tried to date me,” Rivers joked. “I saw him as the perfect package. I would have loved Gloria Vanderbilt as a mother-in-law. This explains everything.”

Joan Gets In Bed With Bianca Del Rio

In one her most recent installments of her web series “In Bed With Joan,” Rivers cozied up with “RuPaul’s Drag Race” season six winner Bianca Del Rio. With the “queen of mean” and the “Rolodex of hate” together under the sheets, literally anything was possible.