HomeNews5 LGBT issues we’re not happy under Trump in 2017

We can all agree that after the progress made in the past years, 2017 has been terrible for the LGBT community under President Donald Trump. Here’s a review of the 5 LGBT issues that got us up in arms.

But before we get started, we just want to mention how Trump gave us a precursor of things to come during the transition period, when the LGBT section of the White House website got dumped.

Remember that? Yeah, we do. Anyway, here are the major issues that happened in 2017, in no particular order.

While we know that Trump has made claims of helping LGBT, everything he says needs to be taken with dollops of salt, given his favoring of anti-LGBT groups.

This was openly made after he spoke at events by the Family Research Council and the Heritage Foundation.

These two, together with other anti-LGBT groups, have belligerently stepped into the public spotlight thanks to the atmosphere created by the rise of Trump.

While the 2013 US Supreme Court decision on LGBT rights anchored most of the progress we’ve made, there’s still a lot of work to be done.

One of these is the defense of the rights of LGBT workers not to be discriminated against with Trump revoking the protections earlier set by then-President Barack Obama.

Fortunately, a US court ruled that LGBT workers all over the US are protected from bias under the 1964 Civil Rights law.

However, the US Supreme Court still needs to speak on the matter of LGBT worker protections, leaving us all on tenterhooks until 2019.

Yeah, so a really big clue that Trump doesn’t really care for the LGBT community was when he chose noted anti-LGBT advocate Mike Pence (and his penchant for conversion therapy) as his vice presidential candidate.

When Trump started setting up his administration, he then started selecting appointees that had a history of targeting the LGBT.

For example, Education Secretary Betsy DeVos is a member of National Organization for Marriage and Focus on the Family, which has consistently attacked LGBT equality and supports ex-gay junk science.

Meanwhile, Justice Secretary and Attorney General Jeff Sessions has been on record saying that same-sex marriage threatens American culture and criticized the US high court on the right to marriage equality, among others.

Since it came to power, the Trump administration has consistently targeted the transgender members of the community, whether trying to ban them from the military due to healthcare costs (and being a disruptive presence) to repealing their protections.

But while Trump’s claims about the military healthcare costs has been debunked, there’s no stopping Sessions from undermining protections for transgender students.

Of course, Sessions is only happy to implement the marching orders of Trump, who thinks that it’s up to the states to decide on bathroom protection bills and transgender protections.

So yeah, Trump and the Republican Party has been adamant about repealing Affordable Care Act (ACA, also known as Obamacare) and instituting their own version of the national healthcare.

The bad news was that the American Healthcare Act (AHCA) they propose has so many problems like offering less coverage for women and LGBT community.

The good news was that despite two tries, their proposed AHCA was shot down by both sides of Congress, which shows how bad it truly was.

We can easily cite more issues that happened in 2017 under the Trump administration, but doing this year-in-review got us depressed so we’re going to start drinking now until 2018 rolls around.

Same-sex couples are happier than... 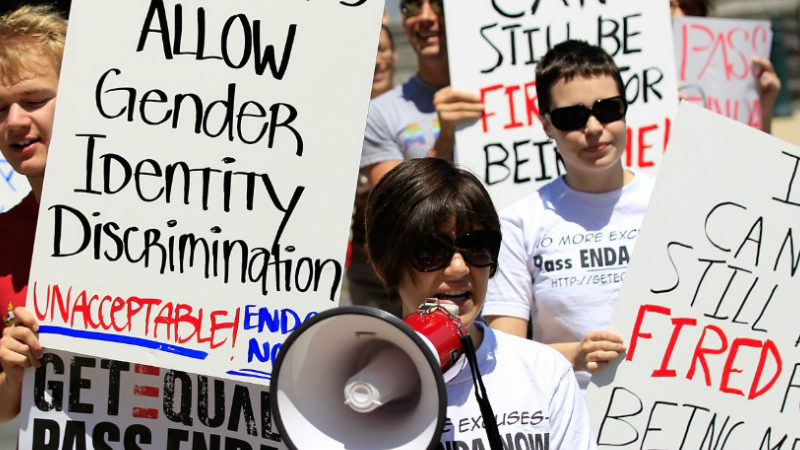